About Us
About Us
Key Metrics
Customer Reach
Economic Development
Community

The largest percentage of rail arrivals and departures on East Coast

2 days drive from 75% of US population

Going to 55-foot channels and berths 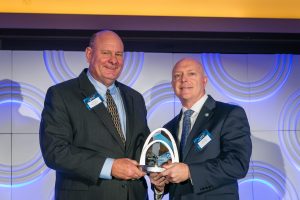 NORFOLK – The Port of Virginia is this year’s winner of the Port Management and Infrastructure award at the Lloyd’s List 2019 Americas Awards, a prestigious annual competition held by one of the maritime industry’s most respected sources of maritime data and information.

This year, the port took home the award for its Virginia International Gateway (VIG) infrastructure project: a three-year, $312 million investment that reimagined and re-engineered one of the nation’s most state-of-the-art terminals. The project doubled VIG’s container and rail capacity, extended its berth to accommodate up to three ULCVs and incorporated the port’s own Trucker Reservation System — called TRS — for motor carriers that is dramatically increasing productivity at the gates.

“As trade patterns shift, the ships calling our coast will get larger and the cargo owners are seeking ways to get their goods to market faster,” said John F. Reinhart, the Virginia Port Authority’s CEO and executive director. “We are driving efficiency and creating a new model for moving cargo. The results we are achieving are truly best-in-class and resonating throughout the industry. 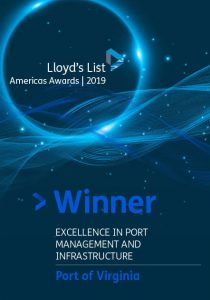 “While it’s humbling to be recognized for our efforts, it’s also an affirmation of the work to which have been committing ourselves. It tells us that the industry is watching and the effort we are putting into making The Port of Virginia the East Coast’s global gateway is being recognized.”

The Excellence in Port Management and Infrastructure award recognizes the company, port authority or terminal that has maintained the highest standards of operational efficiency and customer service. Judges also relied, in part, on the annual Lloyd’s List Top 100 Ports survey and Lloyd’s List Intelligence data on time in port, time at terminal and berth, turnaround times and fuel accessibility.

In the Port Operator of the Year category, the competitors included California-based Ferrini Container and Portonave S/A – Terminais Portuários de Navegantes, a terminal in southern Brazil.

A panel of 15 highly-respected judges evaluated the applications and the winners were named Tuesday at a ceremony held in Houston. The Port of Virginia has earned four nominations over the past three years in the annual competition.

###
The Virginia Port Authority (VPA) is a political subdivision of the Commonwealth of Virginia. The VPA owns and through its private operating subsidiary, Virginia International Terminals, LLC (VIT), operates four general cargo facilities Norfolk International Terminals, Portsmouth Marine Terminal, Newport News Marine Terminal and the Virginia Inland Port in Warren County. The VPA leases Virginia International Gateway and Richmond Marine Terminal. A recent economic impact study from The College of William and Mary shows that The Port of Virginia helps to create more than 550,000 jobs and generated $88.4 billion in total economic impact throughout the Commonwealth on an annual basis.